This is the final post in a three part series entitled: (Re)membering the Ecological Self: An Autoethnography. The first installment can be found here, the second, here. 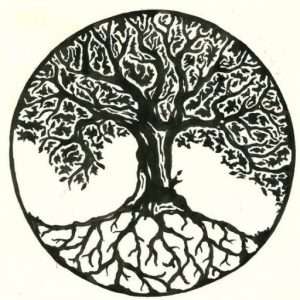 I was compelled by my discovery of ecopsychology to re-connect with nature so that I could test Roszak’s ideas for myself. Fortunately, though I now lived with my wife and two young children in a fairly urban area in west Hamilton (only a few blocks from my first childhood home), we had accessible to us many expansive natural places to explore, such as lands owned and managed by Royal Botanical Gardens and Hamilton Conservation Authority.

I made a point of escaping to natural areas as often as my busy schedule permitted. At first, I found these nature excursions difficult and boring. On each venture into nature, my mind would always initially wander from my immediate experience, worrying itself with the many responsibilities I felt I should be attending. When those initial fears subsided, I felt the lack of stimulation nature afforded uninteresting. I began to wonder whether this Thoreau-like endeavour was silly, a waste of time—time that I should be spending more productively.

But, never one to quit, I remained committed to my ecopsychology experiment. And, after several excursions, something switched. My senses seemed to wake-up. I suddenly became more attuned to the nuances of the natural world around me. I began noticing things I normally ignored: the unique calls of chickadees, juncos, robins, and cardinals; the musty scent of the moist earth after a heavy rainfall; the summer-sun dancing on the leaves of a large red oak, the rough, flaky skin of a shagbark hickory. I began experiencing nature immediately and intimately—like I did when I was a child.

Western-trained psychologist Robert Wolff, who spent several years living with and learning from the Sng’oi people—an indigenous Malaysian tribe who still live as hunter-gatherers—experienced a similar shift. Immersed in the Sng’oi culture, Wolff began experiencing the natural world directly and personally, “Rather than through layers of learned concepts of what the world should be” (Wolff, 2001, p. 4), Wolff (2001) recognized that deep down he always knew that he was one with the world, “but had suppressed that knowing, buried it under words and theories” (p. 4).

I came away from my own nature encounters revitalized, understanding intuitively that I was intertwined with, and inseparable from, the natural world around me. Accompanying this comfort and insight was a strong desire to take care of nature. I was grateful for these experiences and I wanted to give back.

In deep ecologist Arne Naess’ words, I was developing—or perhaps, remembering—an ecological self. Naess (2008) believed that through affiliating with nature, a person’s identity expands to include environmental elements: plants, trees, animals, water bodies, landscapes, and eventually the entire earth could be incorporated into an individual’s self-construal. Naess (1989) argued that cultivating an ecological self leads to a form of self-actualization where, “One experiences oneself to be a genuine part of all life” (p. 174). Moreover, Naess suggested that by way of the ecological self, caring for nature becomes self-care, while harming nature becomes self-harm (Naess, 2007). Naess’ words certainly rang true in my case.

My shift to a more ecological sense of self has not been all sunshine and roses. Although I often came away from nature experiences rejuvenated, there were also times when my new nature-connected identity caused distress. When I heard of environmental destruction—whether it be the removal of several one-hundred-year-old ash trees from nearby Victoria Park or the news of another poorly maintained oil pipeline bursting thousands of miles away—I acutely felt the earth’s pain. I took solace in depth psychologist Bill Plotkin’s (2008) insights during these difficult moments: “Experiencing this distress is [also] natural. It is an essential component of our collective healing. The purpose of pain, after all, is to warn us to take remedial action” (p. 327).

My more ecological identity compelled me to simplify my lifestyle and revaluate my vocational goals. I knew that my occupation had to help in the healing of the human-nature rift, to assist in bringing humanity back down to earth. Environmental planning’s disavowal of human feeling meant that I needed to find an alternative venue in which to contribute to this Great Work (Plotkin, 2008). It was not that I believed that I—or wider Western culture—needed to leave science and the many advantages and insights it affords behind. Rather, I felt strongly that my culture, and I, needed to achieve a new balance: between our heads and our hearts, between our intellects and our intuitions, between our analytical minds and our animal bodies.

Fortunately, I am not alone in my quest. I have discovered a number of inspiring individuals—geologian Thomas Berry, ecologist and philosopher David Abram, depth psychologist and wilderness guide Bill Plotkin, and eco-philosopher Joanna Macy, to name several—who too have heard the voice of the earth and have chosen to respond, each in her or his own unique way. I also see signs of a collective shift in the Western psyche, and this gives me much hope. Each day, more Westerners are waking up to the intimate connection between the personal and the planetary, recognizing that,

To shut ourselves off from…other voices, to continue by our lifestyles to condemn these other sensibilities to the oblivion of extinction, is to rob our own senses of their integrity, and to rob our minds of their coherence. We are human only in contact, and conviviality, with what is not human (Abram, 1996, p. 22).