This post is the second in a three part series entitled: (Re)membering the Ecological Self: An Autoethnography. The first installment can be found here. 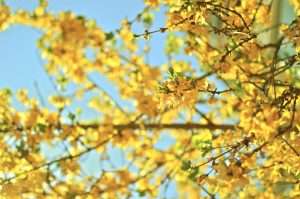 My experience of nature began to evolve as I entered my teenage years. It was in high school that I discovered a love for science. I gravitated toward the fields of biology and chemistry, in particular. I enjoyed using the scientific method to make sense of the natural world and understand its inner-workings. There was something so satisfying about testing hypotheses and coming to verifiable, statistically significant, conclusions.

Throughout my high school years, I also held down a part-time job at a local, family-run greenhouse that cultivated cut flowers and potted-plants. This setting provided me with an ideal opportunity to apply my newfound scientific knowledge to the real world. To my delight, I discovered that with the right combination of heat, light, water, and fertilizer, we could grow larger, more beautiful, plants, more quickly, than nature could. This experience buttressed my belief in science’s power. If anything could improve humanity’s lot, I began to believe, surely it was science.

My interest in, and study of, biology and chemistry continued into university. And, I excelled. Several of my professors believed I showed great promise as a fledging environmental scientist and I was offered a research assistantship in environmental toxicology between my third and fourth years. During the assistantship, I was tasked with designing and carrying-out laboratory experiments to test the mechanisms underlying the uptake of heavy metals in hydroponically-grown wheat (Triticum durum). I felt honoured to contribute to this important work.

To my surprise—and discomfort—I developed an unspoken affection for the wheat seedlings I was testing and tending. I remember eagerly entering the research lab each morning, excited to examine each individual seedling’s overnight growth. Accompanying my excitement, however, was a sorrow felt for the seedlings that were forced to grow in heavy metal saturated solutions. The toxic slurry stunted these seedlings’ growth and many of these plants began turning from their natural green to a translucent white due to their inability to manufacture chlorophyll, a biomolecule critical to photosynthesis. I felt guilty for subjecting these seedlings to such suffering for science’s sake. It just did not seem right.

The empathy I felt for my stunted seedlings was not unlike deep ecologist Arne Naess’ for a flea who hopped into an acid containing petri-dish with which Naess was experimenting. Looking through his microscope into the petri-dish below, Naess knew that,

To save [the flea] was impossible. It took many minutes for the flea to die. Its movements were dreadfully expressive. Naturally, what I felt was a painful sense of compassion and empathy (Naess, as cited in Hourdequin, 2015).

Despite my strong feelings for my suffering seedlings’ plight, I chose to repress them. I felt like I had no other choice. There did not seem to be a place for empathy in science. Moreover, I feared my research supervisor would think my reactions silly and unprofessional, potentially costing me future career prospects. So I soldiered on like I believed a good scientist should, leaving my child-like feelings behind me. Or, so I thought.

After graduating with a Bachelor of Science with a major in biology and a minor in chemistry, I landed a job as an environmental planner at a large consulting firm. The experience was initially exhilarating. I got involved in several high profile environmental assessments and believed that my efforts not only helped my clients—they protected the planet too. I worked primarily in the firm’s environmental management division. My job was to assist clients in navigating the complicated world of Canadian environmental legislation, ensuring that projects received the necessary environmental approvals quickly so that they could move forward.

My vocational enthusiasm waned over time, however. Things began to turn sour when I witnessed how my firm handled public consultation processes. Due to the controversial nature of several of our projects, public facing documents were carefully worded to ensure each project was painted in a positive light. Similar rhetoric was offered to residents at public open houses: “The construction phase of the project alone will result in the creation of thousands of much needed jobs,” and, “there will be no net impacts to any valued ecosystem components.” While our arguments were compelling, I knew that things were more complicated than our documents and presentations suggested. Each project also had drawbacks, particularly for people living close to a proposed development. Did the feelings of these concerned citizens about potential negative impacts to their local landscapes not matter?

It was around this time that I discovered ecopsychology and managed to get my hands on an copy of Theodore Roszak’s elusive book, The Voice of the Earth. Roszak’s words helped me make sense of my situation. He stated that feelings had been excluded from science from the very beginning. The decision to dismiss emotion from science was made, Roszak argued,

Quite deliberately, by a handful of European scientific thinkers in the seventeenth century. Impatiently seeking a practical clarity in their approach to the baffling complexity of nature, they elected to cut away the portion of the world that proved more elusive to observation and more difficult to quantify: the realm of personal experience and emotion (Roszak, 1992, p. 45)

The reason my firm did not take concerned citizens feelings seriously therefore, was because we were working out of a scientific framework that maintained such “subjective” perspectives were worth-less than “objective” measures which could be easily calculated and quickly quantified.

Roszak went even further, however. He indicted modern science’s rejection of “personal experience and emotion” (Roszak, 1992, p. 45) in the creation and maintenance of the environmental crisis plaguing our planet—the very crisis I thought I was helping to alleviate in my scientific environmental planner role. Roszak claimed that science’s denial of the experiential and emotional realm cut humans off from their biophilic instincts, their innate urge to affiliate with other living things and protect them (Kellert & Wilson, 1993; Roszak, 1995). Through its thorough objectification of nature, science freed humans,

From any responsibility to the rest of the biosphere; we [gave] ourselves license to engage other animals, plants, landforms and natural elements merely as resources waiting to be used by our species, as a clutch of fixed and finished entities waiting to be manipulated and engineered to suit our purposes (Abram, 2014).

In this way, the concerned citizens’ anxiety about the possible degradation of their local landscapes was actually a more fully human response to a proposed development than was my firm’s one-sided, rational approach.

My colleagues and I were living in our heads. It seems science had cut us off from our hearts.

This series continues here with the next section, entitled: (Re)membering My Many Parts.

2 thoughts on “(Re)membering the Ecological Self: An Autoethnography – Part 2”